After a few days of wonderful self guided wanderings around the Kathmandu valley, I returned to the city to meet fellow trekkers (a great bunch of Scots guys) and our guide. 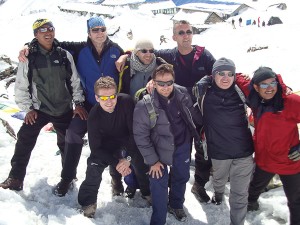 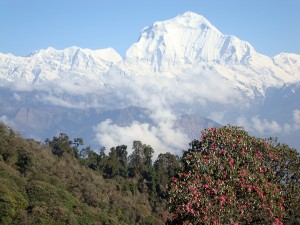 The following day the trek began – a half hour flight to Pokara, a 2 hour drive to the start and off for four and a half hours of walking to the first nights camp – one of us nearly fell in the icy, full river when one of the bamboos on a bridge collapsed but hey, that’s part of the adventure. 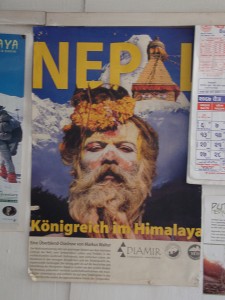 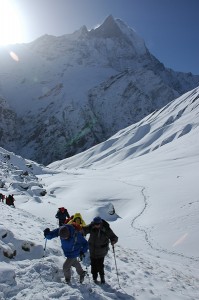 The following day “up, up , up” – to quote our guide Karna. The day started in sunshine and ended in hail (sounds like Derbyshire). We zig-zagged our way up 800 meters of steps and then on through the azaleas, magnolias and orchids to finally reach the nights camp and an opportunity to warm our selves round the stove in the nearby guest house. We were camping but often used the guest house facilities to eat and get warm. And so it continued – up and down (mainly up) sunny clear mornings and cloudy evenings. (snowy evenings as we climbed higher).

Amazing views as we began to see the snow capped peaks approaching, The unclimbed, holy mountain Machapuchare hanging ethereally above all. 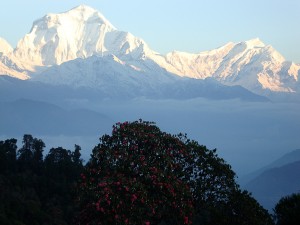 On the 7th day we began to walk into and above the snowline. We needed boots rather than walking sandles, Altitude began to have an effect, We were told the snow was up to 5’ deep at the base camp (when we arrived we found it wasn’t quite that).. Felt completely OK with this – the Sirdar and guides were fantastically supportive as were all the porters and cooks provided by the trek Co – Community Action Treks who are a charitable organisation who paid their staff reasonably and whose profits go to educational and health projects in Nepal. 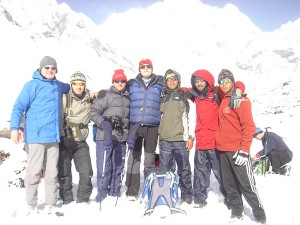 Walking on in the early morning through pristine snow to the Annapurna Sanctuary– a fitting climax to a trip when I can’t remember being sad for even a second. Magnificent! We felt singularly blessed.

Thanks to you all at Challenge Cancer