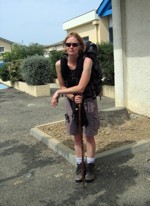 My initial idea to walk ‘El Camino de Santiago de Compostella’ (literally translated as ‘The Way of St James of the field of the star’, the origin of which lay in the story of a shepherd who had a dream about some bones – to be brief) was conceived, as are all good ideas, in a pub somewhere.

It then took a further 5 years to come to fruition when my first steps as a ‘pilgrim’ were taken from one of the 4 main French departure towns for the walk, Le Puy en Velay. The route was to take me westwards through France following in the footsteps of millions dating back to the 9th Century, over The Pyrenees via St Jean Pied de Port and continuing in a similar direction towards Santiago and then Cape Finisterre, to arrive at the coast nearly 1600km later.

I distinctly remember the night be

fore my departure in the youth hostel in Le Puy, the transparency of my over-preparation becoming evident. I can only give thanks to the gentle bullying of complete strangers which forced me to part with 6kg of suddenly arguably essential packweight. This was to become an increasingly familiar process along the way as I learnt in more than one language that ‘every gram counts!’ and ‘less is more’.

That same night, still before taking a single step, the anticipation of getting the dreaded blister was soon put to rest as an over-zealous bout of sock washing made the first journal entry a painful process-“1st April, 2006.

Unbelievable! Learnt already that anti-blister training must not be confined to the foot area alone! Hand washing is essential part of future prep.

With only a few hours to go before set off it’s hard to imagine what it will feel like to have been walking everyday for a month. And people keep talking about tendonitis?!” 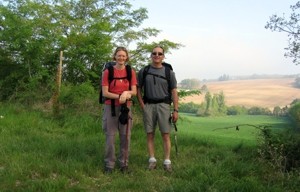 Some two and a half months later (my initial walking companion retiring after 3 weeks due to tendonitis!) I managed to somewhat miraculously reach my primary goal of the cathedral city of Santiago de Compostella relatively unscathed. Getting ready for the final 3 day leg to Cape Finsiterre, the most furtherly western point in Spain and Europe, once hailed by the ancient Galician Celts to be the end of the known world, I suddenly found myself wondering how I was actually going to cope NOT walking every day!

Looking back now, having had some 6-7 months of re-integration into ‘normal’ life, I often find myself wandering back along the Camino; this time pleasantly reminiscing over the full gamut of weather conditions, the diverse and often awe-inspiring terrain, the periods of extreme tranquillity, the frequently hilarious attempts at conversation where so much was lost (and friendships gained) in translation, and last but not least the indispensable and unforgettable camaraderie of the numerous other modern day pilgrims who still devotedly walk for their individual causes

on their individual paths. It is surely they who are the spirit of the Camino. In the more challenging times a handful of reliable sources of inspiration help keep you putting one foot in front of the other. The charities and everyone behind them were a primary one for me. So, for all those who perhaps unknowingly helped me ‘keep on keeping on’, not to mention contribute to the £3300 raised for my 3 chosen charities; Challenge Cancer Through Adventure, Cruse Bereavement Care, and Hope and Homes for Children, I’d like to say a huge, heartfelt ‘THANK YOU!’

Finally, if anyone has even a fleeting thought of having a go, my advice would be – with the thirsty snail as a role model – JUST DO IT!