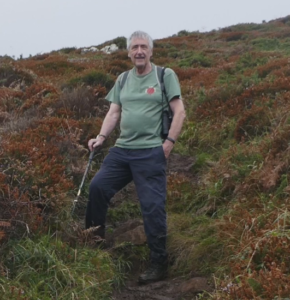 In October 2017, CCTA were able to help Rob Willing fulfil a wish to walk the Lizard Peninsula in Cornwall. Rob and his wife Alison had always been keen walkers, often achieving 70-80 miles a week. This was before Rob was diagnosed with bowel cancer during routine over 60s screening.

Rob and Alison had originally lived in Somerset before moving to the peaks to be nearer to family. They had holidayed regularly in Cornwall some years ago, taking much pleasure in walking the coastal path and wanted if possible to return.

Rob has endured many complications with his illness, from emergency surgery where he wasn’t expected to survive, a stroke which meant having to learn to walk again and kidney problems. He has bravely fought the disease for 2 years, however last year they had to face the blow that the cancer was sadly terminal.

As soon as we heard from Alison and Rob, the trustees unanimously agreed that the CCTA should help. The trip had a complication in that Rob’s kidney problems required him to have a lie down for an hour every day at midday. Other health issues meant he couldn’t carry any luggage weight other than a small back pack. He could also only drive short distances. Previous journeys on trains had been a nightmare when it came to changing trains, carrying luggage and not having anywhere to lie down at the right time of day.

We helped Alison to research the trip and decided the best option was to fly to Cornwall. This enabled them to book a flight at the right time of day to allow for Robs lie down. We then did research on special assistance at both Manchester and Newquay airports to ensure the couple received help with their luggage (including medical supplies) and there was a room for Rob to rest in.

We also contacted the airline to enquire about assistance in case extra support was needed during the flight, before providing Alison with the details. Flying also meant they could easily get a taxi to and from the airport. The help from CCTA also enabled Rob and Alison to use taxis in Cornwall to take them to and from each days walk and bring them back to their holiday cottage if Rob needed a rest.

Alison and Rob set off in mid-October and managed to walk the full coastal path. They were so excited about the trip and had a fantastic time. Walking the lizard gave them both such a positive focus after 2 years of health blows. They were so thrilled with our contribution and it was a real privilege to make this trip happen for them. They are a lovely couple who have faced tremendous adversity so it was a joy to help them fulfil such a special trip.

Please have a look at Rob’s video about his challenge