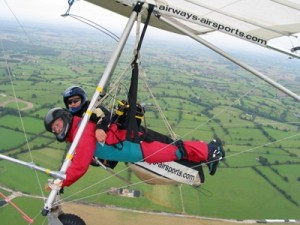 Dawn Hopkinson, one of the ‘seven’ who helped set up Challenge Cancer Through Adventure, undertook the flight of a lifetime on Monday October 3rd, to raise awareness for a new charity that aims to bring adventure to the life of people suffering with terminal illnesses or cancer. Dawn took to the air in a tandem Hang Glider with World Champion Judy Leden. During their 30-minute flight Dawn and Judy were towed up 2500 feet by a microlight tug and ran their fingers through the clouds. After some ‘hands on’ flying by Dawn, Judy took control to bring the hang glider in for a smooth landing.

Dawn undertook her flight at Airways Airsports Airpark at Ashbourne Derbyshire. Although Dawn was perfectly active Airways are one of the few places in the UK where people with a range of disabilities can experience adventures including Hang gliding, Paragliding and flying Microlight Aircraft. Dawn is 58 yrs old and has lived and worked in Derbyshire for thirty years. She is a keen mountaineer, climber and fell runner. 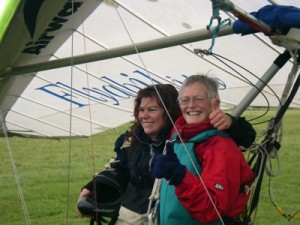 In July 2003 Dawn was diagnosed with advanced ovarian cancer. She had had no real symptoms and had been climbing and fell running the week before her diagnosis! After major surgery and a course of chemotherapy along with complimentary therapies Dawn achieved a partial remission. However she has now had a recurrence of cancer and has recently restarted a course of chemotherapy as well as continuing with all her complimentary therapies.