We are starting to receive feedback about our recently completed challenges, with more challenges due later this year. Full reports to follow, but here is a quick look at the challenges completed so far, and climbing seems to be the theme for 2018. 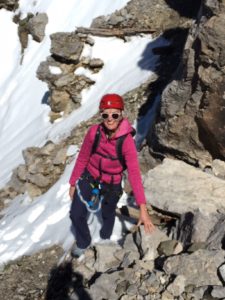 Angela was diagnosed with stage 3 breast cancer in November 2014. The tumour was 8cm and very aggressive, requiring chemotherapy, herceptin, radiotherapy, many operations, and now requiring long term medication. Angela’s challenge was to complete some Via Ferrata treks in the Dolomites in August. Angela managed two Via Ferrata climbs and got over 3,000 metres for the first time. She says about the climbs, ‘They were incredible and exhausting and at some points terrifying! But I’m really glad I got to go and do something I’d never have done without CCTA funding and support.’ 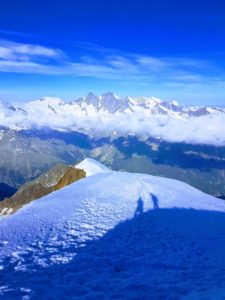 John on the Matterhorn

John‘s challenge was to climb one of the best known mountains in Europe, The Matterhorn. John was diagnosed with throat cancer just after his 60th birthday. He is a keen rock climber and British championship fell runner and has already completed the Bob Graham Round and the Ironman Triathlon. The challenge comprised a few days’ acclimitising on the ‘Gran Paradiso’ before climbing the ‘Lion Ridge’ of the Matterhorn.

John says ‘It was fantastic!!’ He tackled 3/4000 metre peaks and managed to get two thirds of the way up the Matterhorn! It was a shame he didn’t quite get to the summit, but nobody had done in the previous week, or did in the week he was there, due to the many storms which were dropping lots of snow very high up making it very dangerous.
John also reports: ‘Did a big rock route as well. Came back knackered but elated!!’

Details of John’s climb will follow, but we can report that his JustGiving page has already raised over £1500 to support fellow cancer sufferers. 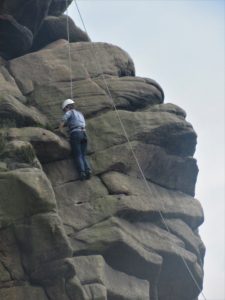 Laura climbing in The Peaks

Laura didn’t have the climbing experience that John had, but was willing to learn. Her challenge was a combination of indoor climbing sessions – covering safety, ropes, setting up to belay, etc. then climbing and leading techniques – followed by outdoor guided sessions in the Peaks to get her up to a level so that she could climb with her son. Quite a challenge given the physical effort and the height, learning a new skill and building confidence so that she can go out climbing without an instructor. 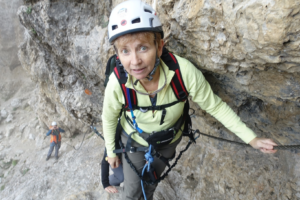 Wendy has had stage 4 metastatic breast cancer with extensive bone metastases for five years. In August, she holidayed in St. Christina Val Gardena, in Italy, with her family and, while there, she wanted to tackle the Via Ferrata. CCTA helped her to organise all that was necessary, including a guide, for her climb. The challenge started with a couple of easy climbs to see how things went, before tackling the bigger Via Ferrata Gran Cir later on, which we’re pleased to report that she completed.

Congratulations to all our Challengers  – Well Done!